Summer’s pretty much ended here in Finland as the weather’s cooling down and nights are falling earlier after the summery white nights. It might not seem like a good time for summing up the beach scene hereabouts, but here I go anyway. Why? Because for an autumn-lover like me this is just about the best time of the year to hit the beaches.

This happens to be a subject I’ve got a huge experience to draw on after decades of open water swimming in every possible occasion. Rare is the day when I leave the house without my swimming trunks and a thin hammam towel so suitable for ex-tempore moments of bathing bliss. Actually it’s more than beaches I’m talking about, much more, as swimming in Helsinki is bound to happen not only from beaches but from rocks and whatnot. (Pools are totally excluded here, although there are fine ones in Helsinki well worth a post of their own, by someone else, as I myself am not much of a pool-type. Hate to feel that chemically purified water, or the thought of it…)

One of the plentiful good swimming spots in Suomenlinna. Photo. Eero Ehanti

Helsinki is a true waterfront city with plenty of designated beaches but also kilometers of open seaside ready for the more adventurous swimmer. Surely, this being the Northern hemisphere and the Baltic Sea, it’s not whitesand beaches by turquoise waters, but more like yellowish gravel on somewhat murky greenish water, which is not even real seawater but brackish water. Definitely no palmtrees. Instead we have lots of pines and spruces and other rich vegetation adorning the shores and providing the shelter for those in search of solitude.

Starting with the official beaches, the best known is the Hietaranta beach, or Hietsu, about which Anna already wrote about in this blog, a long stretch of yellow sand with good facilities, beach volley and occasional parties or other events. It tends to get quite crowded in hot summer days, but that’s what many a beach goes longs for; crowds and games, kind of societal bathing. As everywhere in Finland, the water’s bound to be on the cooler side even in high summer times, hindering effectively swimming urges of many people. Definitely not mine, though. I prefer colder waters because of the extreme refreshing effect one gets afterwards. Anyway Hietsu is a wonderful place for swimming, perhaps some Frisbee or beach volley and definitely a pique nique with friends. We go there from very early spring to very late autumn, and I advise to do the same, as the place very nicely changes within the seasons. Beautiful place indeed! 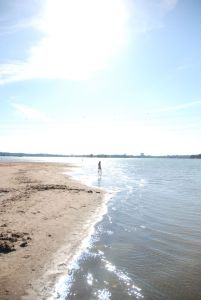 Another old favorite of mine is the beach in Mustikkamaa, just next to the Helsinki zoo, where there’s an open beach area but also more serene small dots of sandy beach sheltered by trees and bushes. It’s a nice bicycle trip from the center, or a bus ride if that’s more to your liking. Take the bus 16 bound for the zoo and get off one stop before the terminus. Good running paths around there as well, and an adventurous climbing park, which together with the zoo very nearby makes this beach a very good option for families.

Another very family-friendly beach is to be found in the beautiful squirrel-filled Seurasaari island, which is known, very deservedly, for the open air-museum with old Finnish folk buildings gathered there from all over the country. The houses are well worth a visit, or several visits, as there’s truly a lot to see and do in that gem of a museum and one of the prides of the National Museum of Finland. The beach is a small one but nicely located in a sheltered place. The Sporty swimmer swims around the island, but if you do so, remember to have a colorful float with you to avoid the risk of getting run over by one of the many boats cruising thereabouts! And if you’re into nudism, there’s a fenced beach area for that with separate sections for men and women.

One of the more urban beaches is to be found in Eiranrata, near to Kaivopuisto. This is a newish setting, a quite nice one, but crowded as well in the sense that there’ll always be people walking by, because it happens to be along a very popular running and strolling route. If you’re looking for more private experience and happen to be thereabouts, you should take the very short boat trip Uunisaari island just a stonethrow away from Kaivopuisto park. (In wintertime there’s a bridge.) A place of natural beauty, it has a nice restaurant and saunas for rent as well as lots of lone sheltered places for those looking for privacy. Lots of birds, too, which is nice for the most part except for the breeding season, when the protective birds might turn your solitude to something more uncomfortable. Still within the Eira/Kaivopuisto area, another option is to take the slightly longer boat trip to Pihlajasaari island, another place of amazing natural beauty. Nudism area there as well. There’s a restaurant and camping possibility, too.

I could go on, easily, with these beaches. There’s a fine long one in the eastern suburb Vuosaari, they say, but I haven’t ventured there for a long time. And so on… But at this point, dear reader, I advise you to forget about these official beaches and just dip into the sea wherever suits you. There are places people go to, like Tervasaari or Suomenlinna, where possibilities abound, or best of them all, the so called Missippi rocks. This happens to be my absolute favorite spot in the city, where I go many times a week with my swimming gear and a nice Toscanello for the very rewarding smoke afterwards accompanied with some poetry or other highly complex literature for which I otherwise don’t find the needed concentration nor solitude. A friend’s a good option as well for these moments of somewhat Zenist character. The wherabouts of these rocks? I’m not going to tell you! You’ll find out if you look hard enough, or else you’ll find your own spot for utilizing fully the nature-wonders of our lovely Northern capital. There’s still time before the waters get really cold, so go for it!

One thought on “Open water swimming in Helsinki”